From the 18th until the 20th of July, I joined the international conference ‘Invisible Places, Sounding Cities’ on sound, urbanism and sense of place in Viseu, Portugal.

On the third day of the conference I presented a paper, written by myself and Francio Guadeloupe titled “Exploring the Liberating Potential of Youthnicities Emerging on Street-Soccer Fields in Europe: The Case of the Netherlands.” 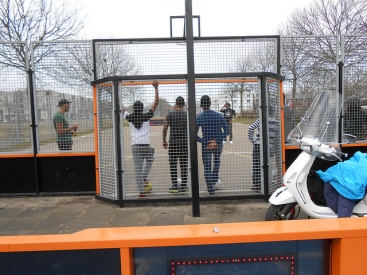 The abstract reads as follows:

In this poetic presentation, I&I give voice to the ways in which new urban tribes, or youthnicities, shaping in / on the game of street-soccer in different parts of the Netherlands, unwork themselves. Our story consists of two distinguishable but not separate tales. The first tells the lie of playing as musicking, a game in which the riddles of multiculturalism are both spoken and unspoken. The second explores the myth of the unworking of the academic I/eye through listening. By playing street-soccer and thus becoming as part of this youthnicity, the I/eye starts to put itself under erasure and learns to listen. By giving voice to these experiences, I&I practice the conviviality of the street in which a ‘we’ cannot be spoken of, but can be a praxis and an ethos.